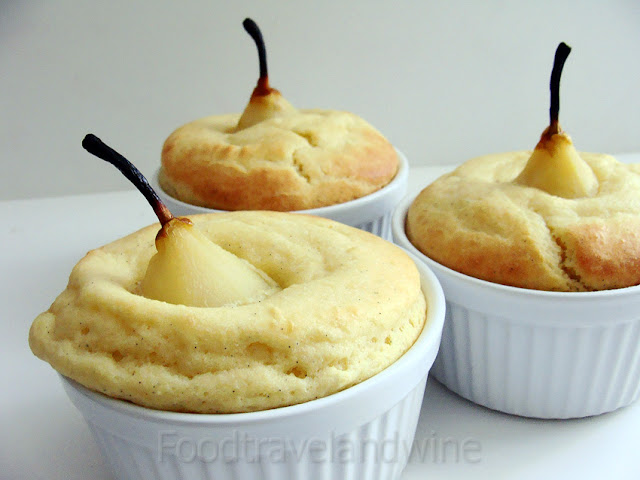 I love pears, they are sweet, tasty, elegant, and goes well with spices that I like such as cinnamon  star anise, and cloves.

I had some pears in the back of the fridge, along with a piece of goat's cheese.....and here is the result!!

Peel the pears. Place them in a pot with spices, and 1/4 cup of sugar. Barely cover them with water half way. Cook them for 3-4 minutes (they have to be firm). Take the pears out. Reduce the water until you have a consistency of a syrup. Let it cool.

Grin the almonds, and mix it with the flour. Separate the egg whites from the yolks. Beat the egg whites until it form peaks. Beat the yolks with the sugar until it is creamy. Add the olive oil, the goat cheese, and vanilla seeds. Add the vanilla and almond essence. Incorporate the mix of flour and almond, and the baking powder. If necessary, then add a little bit of milk (like 2 tablespoons). Incorporate the beaten egg whites with slow movements.

Grease and floured a  ramekin. Place a pear in the middle, and surround it with the mixture. Cook it n a preheated oven at 380-390 F for 30 minutes or until fully cooked. Before serving, make some holes with a bamboo stick, and moist it with the syrup. ENJOY! 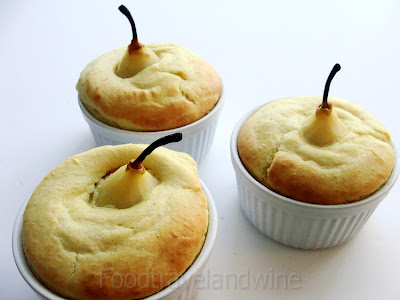 Remember when I did the Mushrooms and Leek Pie? I did the same pie, and instead of mushrooms I used for the filling 70 grams of sliced almonds, and decorated it with olives. In addition, I used the same dough for an artichoke pie. 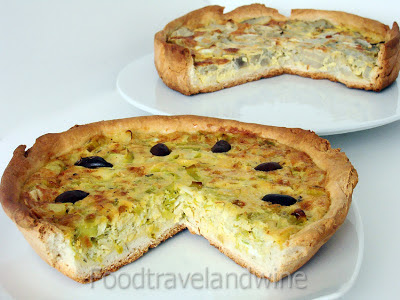 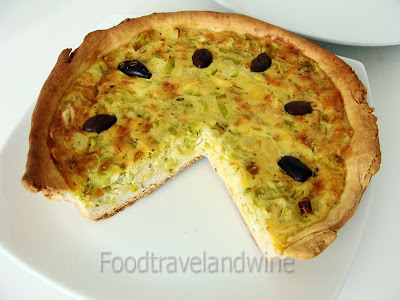 In a pan, sautee the onion and garlic. Sautee the artichokes, and add water to cook them until they are tender. Let it cool.

Beat the milk and eggs. Season it with salt, oregano, parsley, and parmiggiano. Add this mixture to the artichokes.

After you have cooked the dough for 15-20 minutes as in the previous post, take it out from the oven, distribute the diced cheese, the artichoke mix on top, and cook it until is fully cooked. ENJOY!! 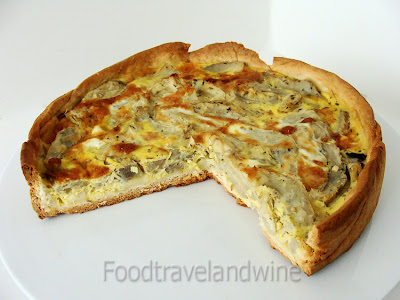 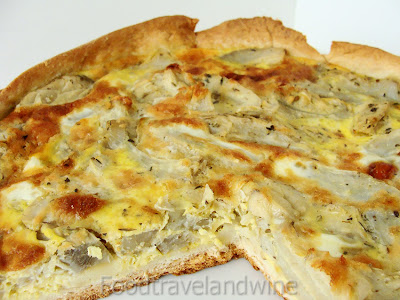 And if you want to participate in the Christmas Raffle, then leave a comment in the following link 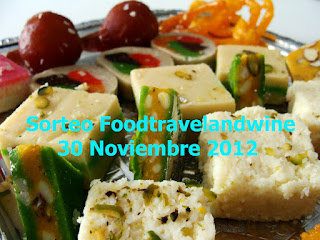 Posted by foodtravelandwine at 9:11 PM