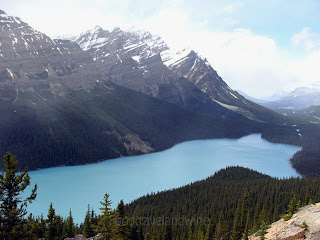 Peyto Lake
I wanted to post earlier, but internet connections are not the best in this area.....and I am really thankful for that!!

I have been blessed enough to visit different National Parks in the world, but the landscape in the Rocky Mountains in Banff and Jasper National Parks are inspiring, touching, and the place to be when we are in need of isolate ourselves of the exhausting routine. 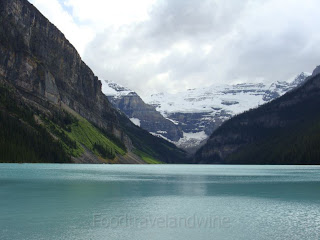 Lake Louise
I have visited many times Banff and Jasper, but not in the last four years. We have been using our holidays to travel abroad, but this year we decided to come to the Mountains for a more relaxing and less frantic vacations.....and we were right......the mountains, lakes, glaciers along with its wildlife and nature has helped us to renovate our souls, and clear our minds. 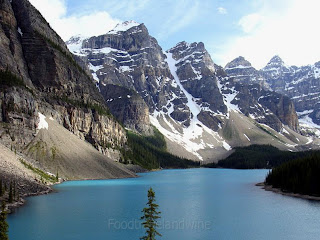 Morraine Lake
During our hikings, we have feel the presence of the magic of the wilderness. It is difficult to explain, but just by sitting and watching this spectacle of the nature, its colors, sounds and aromas, I have felt that God exists, and one of his wonders was made here......

I have a good friend that lives overseas, and he told me that the first time he visited the Rocky Mountains was in 1962. At that time, few trails for trekking existed, and the route from Banff to Jasper was very primitive. But, somebody told him that a beautiful lake called Peyto was in the way from Banff to Jasper. He managed to arrive there, and climbed the mountain. Once in the top of it, he sat and the beauty that he saw made him cry. Thirty eight years later, I visited the Peyto Lake for the first time and had the same experience. It is difficult to explain the magnificence you see in this lake.....and every time I come to the mountains, I feel connected to that Divine Creator that gave us magnificents scenaries like Peyto Lake.

The weather has been fantastic, but when we arrived to Peyto Lake it was snowing. Very unusual....but it gave me another perspective....snowing on summer.

I have an ice cream maker; therefore, it is very easy for me to do it.

In a blender, mix all together. Transfer to your ice cream maker, follow its instructions and .....Enjoy!!

If you do not have an ice-cream maker, then mix everything together in a metalic container and put it in the freezer for two hours. Take it out and use your mixer or minipimer to beat it. Place it in the freezer again, and repeat the beating with the mixer every two hours at least four times more.......Enjoy!!
Posted by foodtravelandwine at 10:02 PM