One of the strangest food I ever ate..... 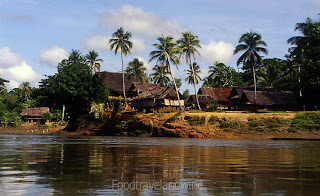 Few days ago, a friend asked me what was the weird food I ever ate. In my travels, I have eaten many things,  and  unusual food like the yak butter tea in Tibet, but nothing has been really "weird" to me. Then, I remembered a situation that was weird itself. The food was different, but the setting was totally strange.... 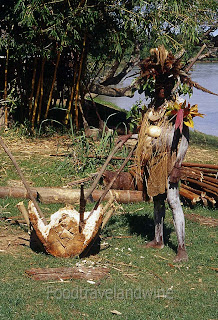 (1) The chief preparing the sago tree starch (from the pith)
We were alone in a lost lodge in Papua New Guinea beside the Sepik River. The landscape was beautiful, and the surroundings were breath-taking: birds of paradise, untouched forest, and people dressing their typical clothes made from the forest. This is the only place we have visited were no single store exist, and barter was the currency to exchange goods and services.
One morning the Chief of the village invited us to a special cooking demonstration......I said....YES!!....Of course.... 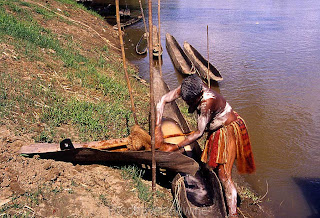 (2) The Chief's wife washing the sago starch with water from the Sepik River
We were honoured to be invited to a special "Sago" food preparation from scratch.....and when I said scratch it was literally that!
The Chief cut down the sago palm, and started to work the pith from the stem (1). Until that moment, I was fine, I know the pith is just parenchyma cells that in some tree species are edible......So, I said no problem! Then, the Chief's wife washed the pith with water from the Sepik River (2), at that time I started to be a little bit concerned. The sepik river is beautiful, but everybody knows that it is full of water-borne diseases (enterococci and e.coli at least) and parasites. So, I said to myself....."nice....you will eat and go to the bathroom at the same time.....very good idea!!"
Nevertheless, I grew up  respecting other's food and with the idea of  "Wherever you go....eat what you see". Although, I have to admit that I have politely rejected some dishes in some countries. 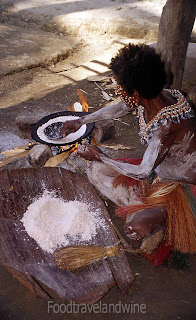 (3) Making the sago pancake
We were in a situation that we neither could escape nor could reject. Therefore, we just waited the meal to be ready. Then, a women started to heat the mix in a big pan to make a kind of "pancake" (3). I was very happy!.....the heat will kill any possible infections. Another women also mix the starch with water, and make a kind of pudding with vegetables and fish from the Sepik river. 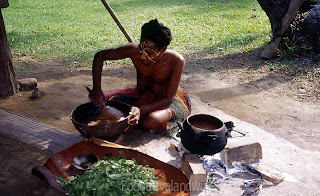 (4) Women of the village preparing the sago pudding with vegetables and fish
We ate both dishes, and we survived!....No disease at all.....we laughed and shared a wonderful day in that village.....
No questions that it was a strange food, but a fantastic experience!!
Posted by foodtravelandwine at 5:49 AM